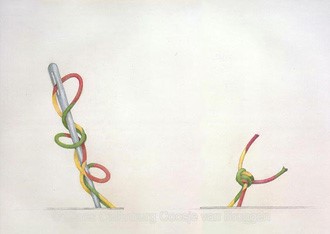 At the end of the 90s, Cadorna Square became one of Milan’s most crucial points for public transport, seen the presence of the Milano Cadorna railway station, the metro station and, lastly, the Malpensa Express line.

This exponential growth necessitated refurbishment of Cadorna railway station and the square onto which it faces. The project was entrusted to the great architect Gae Aulenti who conceived the idea of ​​a giant sculpture.

This is the genesis of the 18-meter high sculpture made of steel and fiberglass, the “Ago, Filo e Nodo” (Needle, Thread, and Knot): the sculpture depicts a gigantic needle with a multicoloured thread, and a knot that appears in a fountain in another part of the piazza. Created by Claes Oldenburg, artist of Swedish origins, and Coosje van Bruggen, born in Holland, the work was inaugurated in 2000. The sculpture expresses a dual symbolism: the three colours (red, green and yellow) represent the three lines of Milan’s metro system, while the needle and thread are a tribute to Milan’s work in the fashion sector.

Statement by the Artists

“Our concept began with the metaphor of a train as a needle and thread, its insertion into fabric compared to the train entering an underground tunnel. Contributing to the rightness of the concept was the subject’s reference to the fashion industry, for which Milan is known. Fabricated of gleaming stainless steel, the needle’s eye engages the open dome of the nearby Sforza Castle. The needle is placed as if having just emerged from a surface and about to plunge into it again. In order to suggest the passage of the thread underground, we added a second part to the sculpture in the form of a knot at some distance from the needle to mark the imagined original point of entry. Ago, Filo e Nodo follows its own trajectory, independent of the Piazzale’s overall design.“