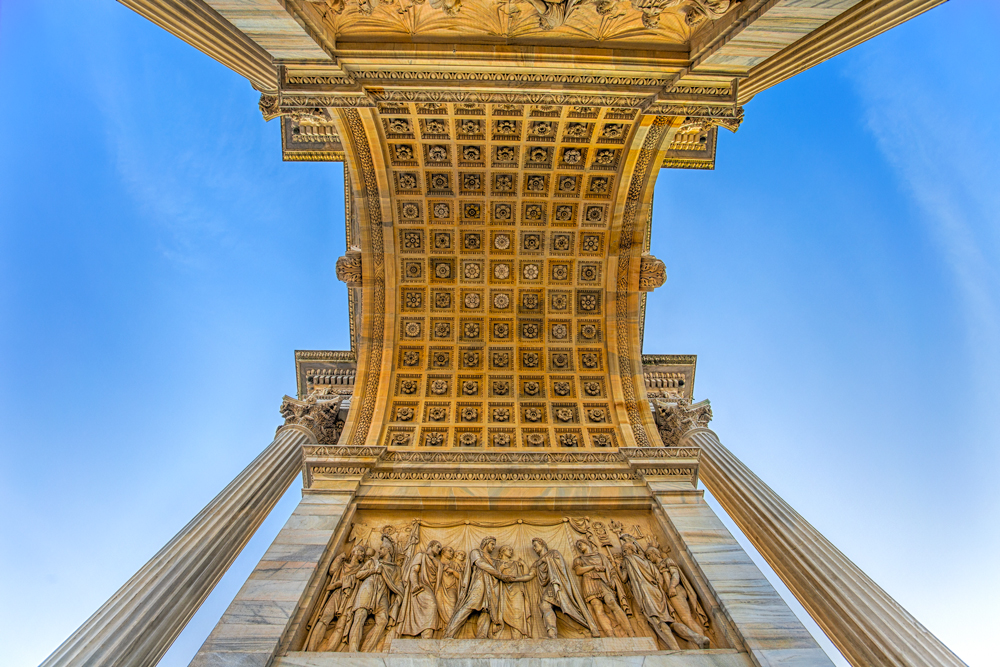 The Arch of Peace (Arco della Pace) is one of the symbols of Milan and one of the most important neoclassical monuments in the city.

Built in 1807 by the architect Luigi Cagnola to celebrate the Napoleonic victories, the Arch is situated in the center of Piazza Sempione. The construction was interrupted after the defeat of Napoleon at Waterloo and completed by Francis I of Austria who dedicated this monument to peace.

The Arch of Peace was built using the Baveno granite and Creola d’Ossola marble and is a landmark of Porta Sempione, one of the five oldest city gates.

The four large statues in front of the attic are allegorical representations of the rivers that flow through the former kingdom of Lombardy-Veneto: the Adige, Po, Ticino and Tagliamento.

On top of the arch stand three sculpture groups. The central one – the Chariot of Peace – shows a six-horsed chariot, sculpted by Abbondio Sangiorgio. The statues on either side of the arch were created by Giovanni Putti and are known as the “Victories on Horseback”. Bas-reliefs along the sides of the arch depict post-Napoleonic events in Italian history.
Anecdote about the Arch of Peace

The main oddity concerns the horses that draw the Chariot of Peace located above the arch. Their position, in fact, has been modified by the Hapsburgs. To mock the French after the fall of Napoleon, the horses have been turned 180 degrees in order to have their lower back oriented towards France.